PAWS is a project initiated by Globalteer, a British charity that raises funds and mobilizes resources to rapidly start charity work in any area or community that needs it. In Cusco, the urgent problem that caught Globalteer’s eye is the population of homeless animals, particularly dogs, which has gotten completely out of hand.

The main mission of the volunteers at PAWS is to reduce the population of stray dogs in the city, but it’s also to fight for the animals’ well-being and to change the locals’ unloving and sometimes violent attitude towards street dogs. Many of the dogs fall victims to car accidents, or suffer severe beatings by humans since the abuse of an ownerless animal isn’t criminalized in Peru. This can leave the dogs with debilitating injuries and with a lot of pain. They do not get medical assistance for the better part of their lives, and are not vaccinated which exposes them to illnesses. They are also not sterilized which is why the population continues to grow.

Of course there are shelters to take care of the dogs locally but spots are scarce and not every dog can be rescued. To PAWS, shelters are just part of the solution when it comes to increasing the welfare of homeless dogs. The organization has shifted its focus towards preventing the tragedy rather than healing the wound: PAWS is working to educate local communities about animal health and welfare by touring the schools, and they are actively microchipping, vaccinating and sterilizing as many dogs as they can possibly catch. 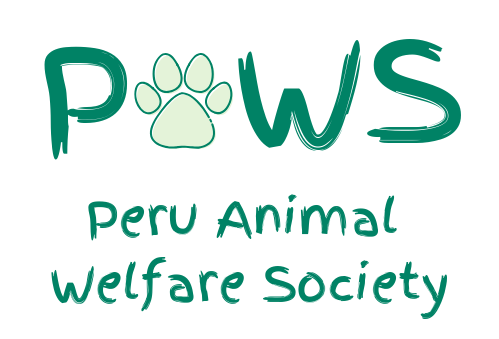 Overpopulation of stray dogs in Peru will never be solved by violence against the animals, that is for sure. But something definitely needs to be done, and quickly, as recent reports suggest there could be as many as 40 000 homeless dogs in the streets of Cusco alone. These dogs are vulnerable, and they also pose a threat to local people due to the diseases they carry. PAWS knows the solution to this issue lies with breeding. Or rather, not breeding: the charity runs a program called CNR (Capture, Neuter, Release), which consists of a mobile veterinary clinic visiting Cusco’s neighbourhoods and surrounding villages to carry out health checks, identify the dogs that can be sterilised, and neuter or spay them. With this program PAWS hopes to drastically reduce the number of homeless dogs in the area, hence creating a brighter and happier future for the animals.
Previous
Next

GIVE DIRECTLY TO
PAWS

Have you always dreamed of visiting Peru?
Go and volunteer in the dog shelter!

Apply to volunteer
in the Cusco shelter
Back to the map